Casablanca Aménagement is a public limited-liability company, initiated in October 2008 by Decree following the presentation of the Master Plan for Urban Development (SDAU) for the Grand Casablanca Region. Its board of directors is presided by the Wali of the Casablanca-Settat Region.

The Company's corporate objectives are : 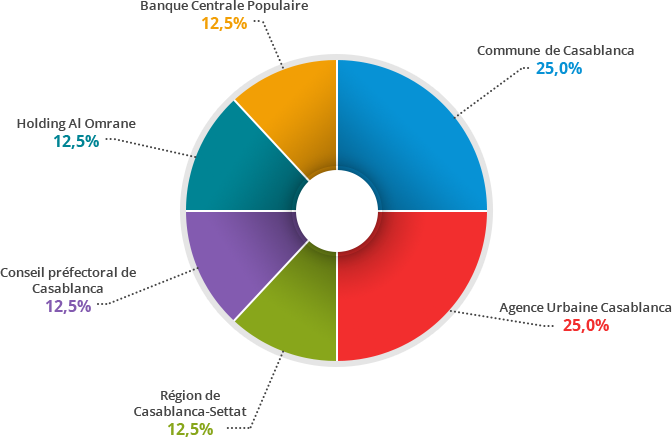 In The Service of the Kingdom's largest metropolis

Hoisting the Kingdom's economic capital to the same level as the largest cities and financial centers in the world is an ambition that demands a real transformation of the city, most notably through the implementation of new infrastructures on the economical, cultural, social, and environmental level.

The 2015-2020 development program of the Grand Casablanca is a witness to the concrete desire of the Region to orient itself towards a better future. The authorities are mobilized to achieve the challenge of this ambitious program by adopting a new strategy within a participative approach.

His Majesty the King Mohammed VI, may God assist him, during the opening session of the third legislative year of the 9 th  legislature of October 11, 2013.

To accompany this development, Casa Aménagement, is mandated by the city's authorities to carry out large structuring projects such as: The Grand Theater of Casablanca, The Super Collecteur Ouest, The Arab League Park, The Mohammed V Sports Complexe and the Ain Sebaa Zoological Park.